Change the Date of Halloween?

The Halloween & Costume Association believes we need more Halloween. They originally set out to change the date of Halloween. But, after observing the backlash from Halloween purist, they want to extend the celebration.

They are now proposing the creation of National Trick or Treat Day, to take place on the last Saturday in October. With over 139,000 petition signatures, they are close to meeting their 150,000-signature goal. 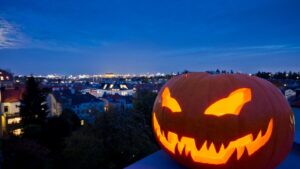 The Halloween & Costume Association started the movement to promote safety. They are calling for a, “safer, longer, stress-free celebration.” They envision National Trick or Treat Day will be a day where, “Americans can participate in community parades, throw neighborhood block parties and opt for daytime Trick or Treating.”

Even Snickers got in on the action, an announced on Twitter they would give away 1 million free candy bars if Halloween was celebrated on the last Saturday of October.

While the petition is not clear on how moving the date for trick or treating will promote safety, it does note that the change would allow for a full day of celebration rather than, “rushed evening weekday hours.”

“A lot of parents and grandparents of young children would appreciate being able to go out earlier in the day for tricks and treats,” says Ellsworth Buck, Vice President of GreatFlorida Insurance, Florida’s largest independent homeowners insurance agency.

As fun as Halloween is for kids, safety is a legitimate issue. The National Safety Council reports, “Children are more than twice as likely to be hit by a car and killed on Halloween than on any other day of the year.”

However, safety might not be the only motivating factor for extending the celebration. According to The National Retail Federation last year Halloween spending reached $9 billion. Candy, costumes and decorations make up the bulk of Halloween purchases.

GreatFlorida Insurance can help you determine the adequate amount of coverage you need for homeowners insurance. Contact us today.