Putting the Brakes on Red-Light Cameras 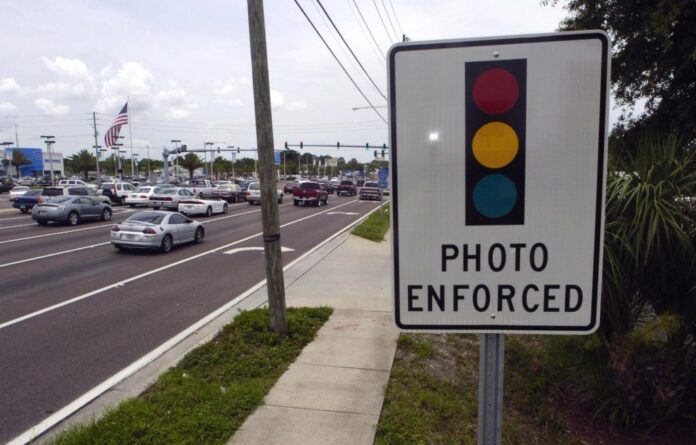 Have you ever turned on a red light after a rolling stop or cruised through a yellow light that turned red when suddenly a large flash of light comes shining through your front window? A couple of weeks later you are greeted at your mailbox by a traffic violation ticket with a picture of the front of your vehicle. If this scenario sounds familiar, you have been nabbed by a red-light camera.

Red-light cameras are used in 74 municipalities and five counties around Florida, covering 922 intersections around the state.

They are mostly found in South and Central Florida including Miami, Tampa, St. Petersburg and Ft. Lauderdale. Red light cameras are used to deter drivers from running red lights, turning on a red light before coming to a full stop and turning right on a red light when a “no turn on red” sign is posted.

The Florida legislature is considering two separate bills that would cease the installation of new red-light cameras and lower the fine for an infraction and the other would ban the cameras altogether.

The bills are making headway after a report was released earlier this year by The Office of Program Policy Analysis and Government Accountability. The study reported an increase in the number of auto accidents at intersections where red-light cameras are used.

While most studies regarding red-light camera use show a decrease in red-light traffic violations, some suggest an increase in the number of auto collisions at those same intersections.

“The most useful information will come from county or municipality evaluations. Nationwide studies on red-light camera effectiveness are often contradictory and lead to confusion about the safest scenario for drivers,” said Buck.

Amid safety concerns, some legislators are convinced the red-light cameras are about increasing revenue not public safety. Statewide red-light camera revenue went from $37.6 billion in 2010-2011 and rose dramatically to $118.9 million in 2012-2013. “It’s a back-door tax increase,” said Sen. Jeff Brandes R- St. Petersburg, sponsor of the bill to ban red-light cameras.

Opinions across Florida are divided. Local officials and law enforcement advocates are against the ban. The Florida Police Chiefs Association support red-light camera use, believing the system is improving safety.

Whether you support the ban or not, we believe every driver in Florida should be committed to safe driving. If you are responsible for an auto accident or the victim, a quality car insurance policy will give you the protection you will need.

GreatFlorida Insurance has knowledgeable agents across Florida who are committed to finding you the most affordable car insurance to fit your needs. Available 24/7, we are available by phone at 888-478-7801 or online at www.greatflorida.com. for a free quote today.